Splendid example of the production of Flemish still life; this painting constitutes an important acquisition from David de Coninck's catalog, depicting a dog, with ammunition in front of him, resting after a fruitful hunt consisting of numerous birds and a wild boar behind him.

A pupil of Jan Fyt in his hometown, De Coninck will keep a strong bond with the master throughout his career, especially in his production of animal rights subjects but also in the floral inserts of his compositions; it was then the common Flemish origin that prompted him, once in Rome, to frequent Abraham Brueghel (Antwerp 1631-Naples 1697) present in the city until 1675, and to take up the models, while transforming them with very personal variations. 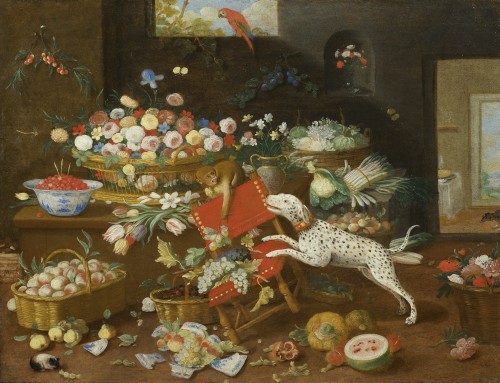